Forster focused on pushing Hart all the way 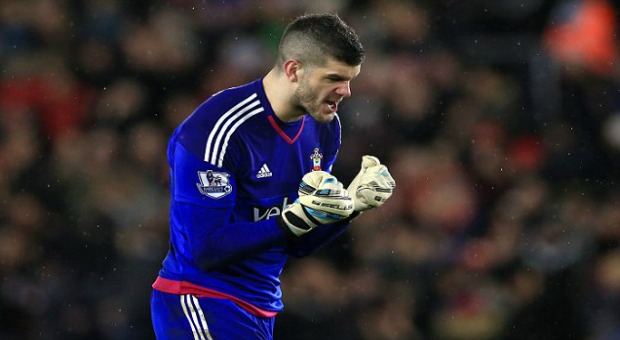 England goalkeeper Fraser Forster says he is determined to push Joe Hart as hard as he can in his bid to become his country’s first-choice stopper.

he giant Southampton custodian was reacting to speculation that Chelsea may be interested in bringing him to Stamford Bridge this summer.

Forster however says he is committed to the Saints and he wants to focus his time on keeping Hart on his toes ahead of the Euro 2016 Finals in France.

The ex-Celtic and Newcastle goalkeeper says that Manchester City’s Hart is worthy of the England gloves but he is willing to accept his role in ensuring that he maintains the high standards he has set for himself.

Forster, 28, says he is flattered by speculation linking him with a move to Chelsea but he feels he owes Southampton after the club stood by him during a tough year of injury hell. ”

I think [the Chelsea link] is a compliment in many ways because if you are being linked with teams then you are obviously doing the right things,” Forster told Four Four Two. “[But] I have two years left on my contract at Southampton and I have loved my time here. I can’t thank the club enough for the way they have stood by me when I was injured.”

Forster has five England caps under his belt and would dearly love to add to that tally when Roy Hodgson’s Three Lions face Russia, Wales and Slovakia in France this June. For now, he has no problem in conceding that Hart is the best man for the England job.

“I’m just concentrating on my day-to-day business here at the club and then hopefully I can have a good summer with England,” he added.

“Everybody knows that Joe is the number one and he deserves that. He is a top keeper, but that’s the challenge for the rest of us, to push him as hard as we can and try and put pressure on him.”

England are 6.00 to be eliminated from Euro 2016 at the semi-finals stage while Hodgson’s men are 9.00 to win the tournament outright.


Forster focused on pushing Hart all the way


Forster focused on pushing Hart all the way