Hazard wants to be Euros star 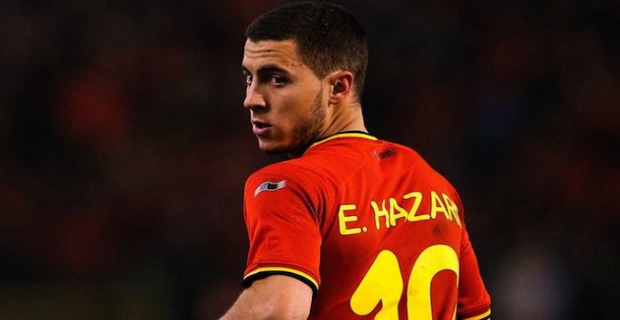 Eden Hazard is determined to put a disappointing Premier League season behind him with Chelsea by being the star of Euro 2016 with Belgium this summer.

The 25-year-old attacking midfielder, who moved to Chelsea from French club Lille in summer 2012 for £32million, enjoyed a stellar campaign at Stamford Bridge in 2014-15 as he helped Jose Mourinho’s side win the Premier League and Capital One Cup.

Hazard’s performances and 19 goals in all competitions earned him the PFA Player of the Year award and put him on the wanted list of several top European clubs including Paris Saint-Germain and Real Madrid.

However a combination of injury problems and speculation over his future resulted in a loss of form this season, while Chelsea have struggled as a whole as they are set to finish outside the European qualification places following a disastrous first half to the campaign which culminated in Mourinho leaving.

But, after scoring his first Premier League goal of the season in last Saturday’s 4-1 win at Bournemouth, he is hopeful of recapturing his best form for his country in the European Championships in France.

He said: “Being out (injured) is not cool but it allows you to be able to relax and get some rest. “So I will probably be fresher for the European Championships but we’ll see whether it was a good thing or a bad thing.

I want to be the star of the European Championship. “I’m going to give the maximum in order to succeed and I hope that I will be ready at the start of the tournament. “I hope to be 100% and not have to bother with more injuries. I will give everything to win the European Championship. You never know…” Belgium are 12.00 to win Euro 2016, while they can be backed at 2.00 to win Group B ahead of Italy, Sweden and Republic of Ireland.


Hazard wants to be Euros star


Hazard wants to be Euros star