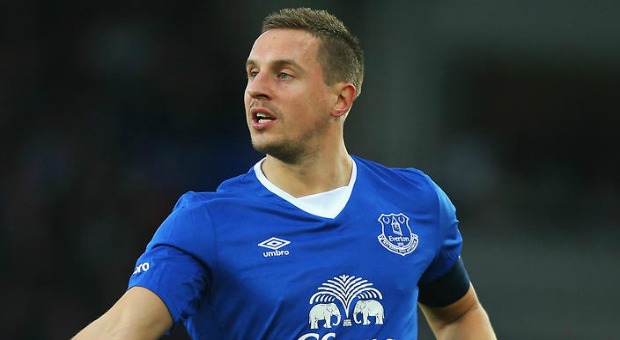 Everton defender Phil Jagielka’s hopes of being involved in England’s Euro 2016 campaign have been hit by a potential season-ending hamstring problem.

The 33-year-old central defender had been struggling with the injury in the fortnight before last Saturday evening’s 2-1 FA Cup semi-final defeat against Manchester United at Wembley.

However Jagielka stepped up to the plate to fill the void created by Ramiro Funes Mori’s three-match ban following his straight red card in the 4-0 Merseyside derby defeat at Liverpool last Wednesday.

His involvement in the game has led to a recurrence of the hamstring issue with boss Roberto Martinez confirming on Wednesday that he is unlikely to feature in the remaining four Premier League games of the season.

“Jagielka is going to be missing for the next few games,” he said. “It’s too early to say if he’ll miss the rest of the season.” If Jagielka does not play between now and May 15, then he will find it difficult to persuade England boss Roy Hodgson to include him in his squad for the European Championships in France.

Hodgson has used the likes of Chris Smalling and Gary Cahill in the central defensive positions of late, while Jagielka’s Toffees’ team-mate John Stones could secure a place in the squad ahead of him.

In the meantime Martinez has admitted he will be forced to field a weakened defence against Bournemouth on Saturday with Jagielka absent, Funes Mori serving the second of a three-match ban and right-back Seamus Coleman injured. “We’ll have a little bit of a weak back four in terms of the bodies missing,” he said at the pre-match press conference.

“Maybe we’ll have a good opportunity for some young player to come along.”
England are 9.00 to win Euro 2016 this summer, while they can be backed at 1.80 to win Group B ahead of Wales, Russia and Slovakia.