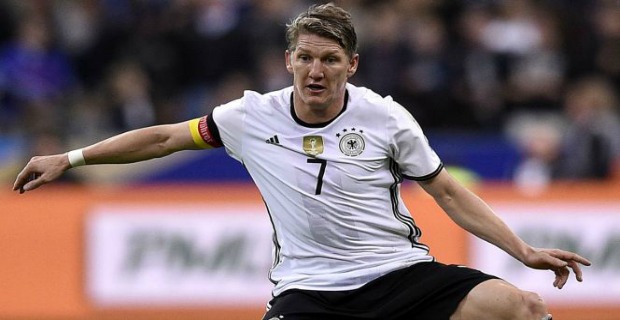 Mesut Ozil has spoken out on Germany international team-mate Bastian Schweinsteiger and insisted it would be pointless for him to go to Euro 2016 if he is not fit enough.

The 27-year-old Arsenal playmaker has spoken out on his captain as the countdown to this summer’s tournament in France continues in earnest. Schweinsteiger has been a key figure in Germany’s midfield engine room since making his bow in 2004 and helped the side win the World Cup in Brazil two years ago.

However the 31-year-old’s chances of being involved in the European Championships in France are hanging in the balance as he remains sidelined by a knee ligament injury picked up on international duty last month.

It is the latest in a succession of injury issues to hamper Schweinsteiger since he moved to Manchester United from Bayern Munich last summer.

Germany coach Joachim Low has previously said he will give the player as long as possible to prove his fitness, while there has been talk of him being involved in the back-room team if he is not fit.

But Ozil feels that only a fully-fit Schweinsteiger who can have an impact on the team’s campaign on the pitch should travel.

He said: “We do not need him as third assistant coach; we need him with his experience and game intelligence on the pitch.” Germany, who are 4.50 to win Euro 2016, can be backed at 1.40 to qualify for the knockout stages as Group C winners ahead of Poland, Ukraine and Northern Ireland.